Just to say that I am standing as a candidate for the Cilycwm seat on Carmarthenshire County Council. The by-election will be held on the 22nd September and if elected I intend to be a very strong voice for the communities within this ward.

It looks like it might be quite a lively campaign, I've already had one political party threaten me with a dirty campaign if I didn't withdraw my nomination by last Thursday's deadline. Charming! 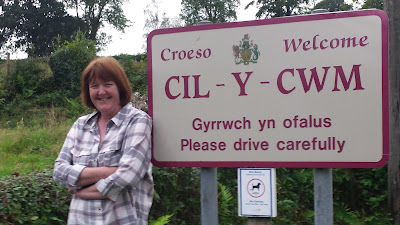 Yay! I'm so glad you are prepared to stand as a candidate and if elected am sure that you will continue to work hard both for your constituents and the broader body of Carmarthenshire residents - so many of them have been very badly let down by the current (and previous) councilors.

As for political threats,“Sunlight is said to be the best of disinfectants”. Publish each threat and allow the electorate to decide, now and in 2017.

Very best of luck, Jacqui - you are the sort of person we need to represent us on the council but, as you've apparently already found out, be prepared for dirty tricks: and give them publicity!

Good luck Jacqui, you would be a good addition to the county council!

As for dirty tricks, publicise them!

People only ever initiate a dirty tricks campaign when they are scared of you and don't think they'll win a clean fight. There are risks to it (exposure) which mean you don't go down that road unless you really can't see an alternative. What the party in question are trying to do is to limit the choices available to the electorate - to deny them their right to be able to support a candidate representing their views (because if they held the party's views, they would vote for them anyway). They are actively trying to prevent the public from having that choice, which I personally feel is something the electorate might benefit from being aware of when they consider the suitability of the party involved to represent them. Would you want to be represented by someone who actively tried to reduce your options for their own personal gain? No - me neither.

Secondly, let me say I am amused by the stupidity of anyone who made such a threat against you. Your track record is hardly that of the shrinking violet. You have to wonder about the judgement of someone who thinks trying to imtimidate you is a good idea!

Personally, I eagerly await the day when you are able to stare Mr. James down from within the chamber. That's one webcast I'll definitely be catching!

Though I am not part of your electorate, I wish you every success in your campaign. You have already proved yourself a dogged pursuer of the truth and public interest, and your electorate would be damned lucky to have you.

Y Cneifiwr's blog "The Cilycwm Stakes" a good read with a mixed bag of comments. Overall pretty supportive of Jacqui. I made two comments and this is the last one "Jacqui is already a Community Councillor but of course being a County Councillor is another kettle of fish. From her personal experiences with this council she will understand the frustrations her constituents might have in their dealings with it. Her own problems have made her more aware of how maladministration impacts on us the public and why it's important the officers & members follow the very good policies & procedures this council have in place but apparently rarely follow. I don't believe the executive will be able to pull the wool over her eyes as it seems to with so many others. Pembrokeshire have a couple of County Councillor bloggers so if she does represent Cilycwm I hope she'll continue to keep us informed as we are powerless to make our voices heard when kept in the dark. Those of us who prefer to only accept the official spin from the council as the truth and nothing but the truth are the total bonkers ones for burying their heads in the sand. For Jacqui to be still standing after what this awful council has thrown at her and not to have lost her fighting spirit shows she'll not be easily frightened off when fighting for her constituents rights. Good luck to her I say!" Jacqui I'm sure you will do Carmarthenshire proud should you win the seat and I'm also sure your Cilycwm constituents will find they have someone willing to listen and act on their behalf. Good luck!

Thank you for all the comments and support.

@Martin
Perhaps I should say that the mystery party was not associated with a previous candidate.
As for the 'independent grouping' issue, it is definitely an anomaly which can't continue and I raised this with the electoral commission back in 2014 http://carmarthenplanning.blogspot.co.uk/2014/10/the-independent-paradox.html. without much success at the time. I also wonder just how long the Independent Group on the council will linger on, given that a few of the usual suspects are due to stand down in May. We'll wait and see.
Just to be clear though, this time I'm standing with Cllr Sian Caiach's group, People First.
Thank you for your support.

Genuine question......if either the Council and/or the CEO pursues you to the point of you being declared bankrupt, will you be debarred from standing as a prospective councillor.

Anon 00:41
If either the CEO and/or council wish to go down that road, and I don't know if that is their intention, then that is up to them, it is a long and complex process however and would not debar me from standing either now, or in May, it is also something I would strongly resist. Being made bankrupt in itself is not a bar, there would have to be an additional Bankruptcy Restriction Order.

As we now have a Plaid Cymru run council it was Emlyn Dole's decision to pursue me for costs; how far he wants to push this, and squander even more public money, will be interesting, especially given the unlawful aspects of the case...

Hi Jacqui I remember reading below article and was wondering if you had any thoughts on this?

Also I think it's great news to have someone that actually puts the people of Carmarthenshire first.

Hi anon 22:09, Mr Salmon's description of the council as a Sicilian cartel was spot on and as Commissioner for four years, speaks from direct experience!