The council and the Rainbow flag - this week's Cadno

This week's Cadno piece in the Carmarthenshire Herald takes a look at the council's continuing reluctance to fly the Rainbow flag; the symbol of equality, solidarity and inclusion for lesbian, gay and bisexual rights. During Pride celebrations and LGBT history month the colourful symbol proudly adorns the headquarters of most public bodies across Wales, including the Welsh Assembly.

As we discovered in February 2015, (see No fly zone for the Rainbow Flag), despite the council appearing in the top 100 of Stonewall employers, they refused to fly the flag to celebrate LGBT history month, this just happened to coincide with an unfurling and raising of the Duke of York's flag instead, as a birthday tribute. Wry commentators at the time wondered if this was to increase the odds of additional CBEs, OBEs etc being showered on the great and good of county hall.
It was established at the time that the council actually possessed a carefully folded Rainbow flag, pristine and unused.

Questions were raised by members of the council's own diversity group who were initially told that as the council had sooo many requests to fly flags for various groups, it flew none. Not a problem for the Welsh Assembly or other councils it seems.
A direct appeal to the chief executive met with refusal.

Move forward to February 2016, another mention in the Stonewall rating, and this time it was the Herald which enquired about the absence of the flag during LGBT month. The council 'had a procedure', the newspaper were told. Enquiries to other public bodies as to whether they too had 'procedures' were met with derision.

Cadno noticed that the flag was again absent from the turrets of county hall during recent Pride events held in the county. The Herald asked the council for an explanation last week and received no reply. The newspaper then learned via other sources, that the 'procedure' involved 'applicants' making a formal request twenty eight days beforehand to be considered by the Leader and Chief Executive.

Further enquiries were made, including the question as to why a procedure was necessary at all when other bodies managed without one. Again there was no reply, despite, as Cadno says "the council is well used to defending the indefensible, or at least unlawfully funding the defence of its officers", so he had expected a fairly swift response.

And as Cadno also points out the Council's Rainbow flag made a brief appearance over County Hall following the Orlando massacre, without any procedure at all. This, I noticed at the time, was prompted instead from a plea on Twitter, and presumably the threat of a PR disaster played out on social media.

Cadno then recalls the council's long standing indulgence of another organisation, the Towy Community Church and is reminded, that 'some rum religious types have inveigled their way into County Hall over the years'.

Regular readers of this blog, and Cneifiwr's, will be aware of the considerable support, around £1.4m, in land, loans and grants to the evangelical church bowling alley. One such grant was, as Cadno reminds us, 'almost simultaneous with a cut to the funding of a school for children with special needs' and featured, in March 2015, a visit by the council's executive board to iron out some planning difficulties and express a desire to bless them with a new boiler.

Cadno penned this piece at the time.

The Towy Community Church, as with some other evangelical groups, put their faith in the literal truth, the living word if you will, of the Bible and this includes elements, and links to other organisations which are at odds with the advancement of the inclusive society we cherish today. An additional bonus is that eternal conscious punishment awaits all non-believers.

It was on this basis that the council funded, and 'partnered' with the organisation back in 2011/12, relying on the church's own equalities policy rather than creating their own.
Requests for copies of correspondence between the two organisations were not just refused by county Hall, but resisted with particularly dogged determination.

Cadno concludes the piece by denigrating, naturally, 'any suggestion that those involved with the formulation of a policy in relation to the Rainbow Flag would - in any way - allow their personal beliefs to over come and affect the performance of their public duty...." 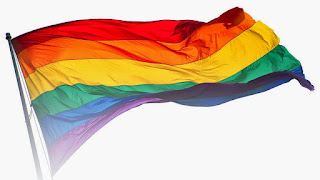 Would any brave Members dare raise the issue in Council and force it to a vote?

There was a motion on this matter on the 15/11/17 to support national Aids day. it was voted down and a amendment was tabled on the lines of encouraging people of Carmarthshire to wear the read ribbon. Only 19 County Councillors stood their ground and voted agent the propel as it still did not go far enough by flying either the rainbow flag or the red flag.