My application to reduce the monthly instalments which I am paying to chief executive Mark James was heard at Carmarthen County Court yesterday. I was asking to vary the Order made on 23rd March 2017 when Mr James was granted an Order for Sale of my home, the Order was suspended as long as I made monthly payments to him of £250 for fifteen years.

I represented myself at the hour long hearing yesterday, along with my husband.

Mr James, who was opposing my application, and was not present at the hearing, was represented by a legal team of three from Cardiff Bay.

I am pleased to say that the judge decided to reduce the instalments from £250 to £165 per month; it's still a lot, and wasn't quite what I'd asked for but this reduction helps us a great deal.

Attempts were made, a few days before (see letter below), and immediately prior to the hearing to persuade me to withdraw my application under the threat of costs. However, after the ruling the judge decided that I only had to pay £500 towards Mr James' £2500 costs bill, to be added onto the total debt. (See also below)

Mr James will have to pay the balance of £2000 to his lawyers himself.

I am pleased with the outcome of the hearing.

In light of the whole case, is was, perhaps, a small victory, but a hard fought and significant victory nonetheless.

The Court Order following the hearing on the 16th March;

I won't be publishing comments on this post, but once again, many thanks for the messages of support.

Posts on the March 2017 hearing can be found here and here. Please search this blog for further background to the libel case and unlawful indemnity.

Update 27th March; The Carmarthen Journal has reported on the hearing here. 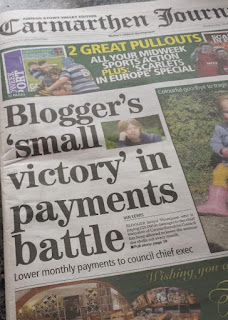 The total amount I am to pay Mr James is now around £43,000. As I have said previously, he broke his promise about handing over the damages to the council and neither has he repaid the unlawful public funding of £30,000.
The Journal asked Mr James for a comment but he has not provided one, to date.
Posted by caebrwyn at 08:27

Your circumstances exist as a result of an evil and corrupt administrator gaining a judgement on evidence provided by his lawyers on an absolutely fabricated prosecution. In your case corruption has prevailed occasioning real injustice and hardship to an innocent person.