The Archives and the mould

The Archive Service at Parc Myrddin, Carmarthen, managed by the county council, is one of only twenty two official repositories in Wales storing thousands of documents along two miles of shelving - a treasure trove of historical material relating to the whole county, comprising official records and deposited private collections.

The council webpage proudly states that 'The Archives Service has in its care documents which date from the fourteenth to the twenty-first century. These unique records are the raw material for evidential historical and family research. They form the written memory of the County.'

Unfortunately there is a problem. The strongrooms which hold all the original material are now closed due to a 'serious outbreak of mould', although the webpage is less specific and refers to it as a 'problem'.

The fungal contamination was discovered back in November and it is not known whether any original documents have been affected. Although the searchroom remains open, no original documents are accessible, not even by staff. The cost of treatment is also unknown but will certainly not come cheap. 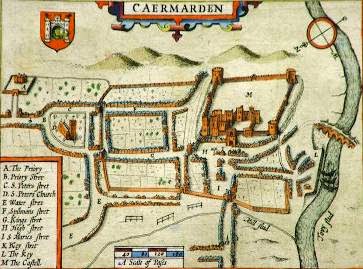 Back in November 2011 The National Archives Inspectorate, which had accredited the Archives as an official repository of records, recommended urgent capital investment to 'meet environmental criteria'. Again it is not known whether any urgent work was carried out but given the current problem it seems whatever was done or not done, was inadequate.

During 2012 Carmarthenshire's libraries, museums and archive service were all transferred from the Education department to Leisure; management was restructured and various 'overarching' objectives were dreamt up. One current idea floating around County Hall is for the whole Leisure section to be run by some sort of trust. The digitisation of the archives is also apparently on the cards, as long as the archives don't disappear in a fungal cloud before they get round to it I suppose.


Historic records and archives are not the be all and end all of life, but are accessed by several thousand visitors every year for numerous reasons, and the archive is also a Statutory service provided by the local authority.
The service currently employs four full time and three part time relief staff with a controllable budget for this year of £186,000 to safeguard and preserve an irreplaceable priceless heritage, roughly the equivalent of the chief executive's salary.

It's a pity that whilst money was found to fund various legal exploits on behalf of senior officials, or even to pay off third party loans for private companies, the "written memory of the county" seems to have been allowed to moulder away.

When can the earliest Freedom of Information request be made to discover the true depth of this catastrophe?

If the Council has, through inaction and in the full knowledge of the risk, allowed irreplaceable heritage assets to be damaged or lost, it would be an abrogation of the trust and responsibility that the Council has to care for these records.

On the other hand, it may be just more evidence of the struggle that Councils face in balancing competing demands, such as physical conservation versus the availability of public access to them) when budgets have been so viciously cut. Another example of the sacrifices that individuals and the public have made in the blind headlong rush to slash public spending. Possibly money spent on libel cases and pension dodges might have been more wisely allocated?

As someone who uses the services of the archives I certainly hope that they can get the problem sorted out so that the records can once more be accessed. Not one of the biggest archive offices I have visited but the staff are always helpful.