Is County Hall turning its guns on the Herald? 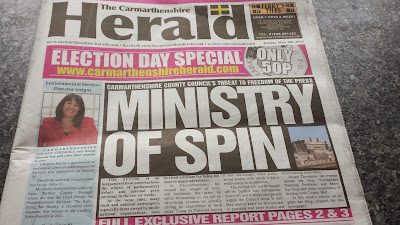 Judging by this week's edition, and despite only being launched in March, the Carmarthenshire Herald appears to be coming under pressure from County Hall over its publication of negative council news stories and its determination to get to the truth.

The Herald's statement, placed squarely on the front page, suggests that there has been a specific incident. It is astonishing and deeply disturbing that yet again, County Hall believes it can wield power to suppress and control the editorial content of the local independent press. It has learnt nothing.

The Carmarthenshire Herald is sending a very strong and very clear message to County Hall;

"..In Carmarthenshire, the council has sought to bully and intimidate the press by either threatening to cut off its advertising revenue or actually cutting its expenditure in local press.

Using its financial muscle it has encouraged other public sector bodies with which it has a relationship to do likewise.

The Herald will not be bought off or bullied into submission however; and if misguided people within the council think it will, they need to know we will not rest in pursuing real news stories and investigating real issues"

The article continues and adapts for publication my March blogpost concerning the review of the press and media protocol along with the council's 'form' for attempting to suppress criticism and investigative journalism, including the notorious incident with the South Wales Guardian; Ministry of Spin - Leopards don't change their spots 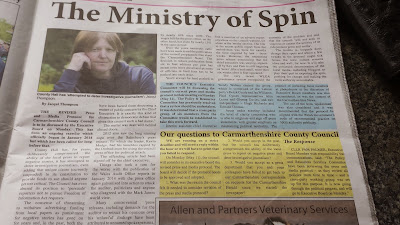 In light of the above, and with the revised press protocol on the agenda for Monday's Executive Board meeting the Herald posed some very pertinent questions to the council;

1. What was the reason the council felt it needed to consider revision of the press and media protocol?

2. Would you accept in the past that the council has deliberately compromised the ability of the local press to report on negative press and deter investigative journalism?

3. Would you accept as a press department that you and your colleagues have failed to get back to our Carmarthenshire correspondents on requests for the Carmarthenshire Herald since we started the newspaper?

The 'response', if you could call it that, came from Cllr Pam Palmer who, despite having made her derogatory views concerning the local press publicly known, has the portfolio for 'Communications', I doubt it was her who actually 'responded' and I doubt very much if the Herald expected an honest answer;

"The Policy and Resources Scrutiny Committee have been reviewing the press and media protocol - as they review all policies from time to time - and a cross-party working group was set up for this purpose. It is now going through the political process and will go to Executive Board on Monday"

I remain of the opinion that it is not Pam Palmer, nor Kevin Madge, or anyone else for that matter who has form for flexing dictatorial power - it is the chief executive Mark James who has always been at the root of the problem, and his disciples have been complicit in letting it all happen.

The damning findings of the WLGA review concerning the relationship between County Hall and the press are, it would appear, being treated with utter contempt.
Posted by caebrwyn at 12:29

Could that not be the registered motto. How about badges showing. C.C.C. "We treat with contempt all types of dissent."

At least they show no discrimination. Top marks for consistency.

Is it actually legal for the council to actually make advertising decisions like this ?

Also - this sort of stuff is meat and drink to the Hearald. they must have been expecting it and the newsworthiness of it possibly outweighs the losses in revenue from a few adverts ?

Anon 08:56
I don't know whether its legal or not but it's certainly unethical.
It shouldn't happen and the Herald shouldn't have to expect it, the council is a public body and should not be attempting to control what you can and cannot read in the local press.

I quite agree with you.

I have a warm sticky feeling that the whole car crash of a council is going to hit the buffers at some point.


I thing the Hearald will deal with the threat effectively and probably relish what is being done to them by the council.

Both you and I have felt the fall out from asking too many awkward questions and making too many (justified) criticisms of these people. I know there are many others.

Ministers within the Assembly cannot continue to 'turn a blind eye' to what is going on here in Carmarthenshire. When public sevices and people of this county are being affected - and they most certainly are, Ministers
can put the council under 'special measures' And it wouldn't be before time.

Mark James instrumental in having claim on blogger's house.
Mark James +officers actions will potentially be responsible for a couple losing their home

.Mark James attempting to stifle truth and honesty by putting pressure on what should be a free press.

I could go on.

Good on you Herald.Well done and hope you go from strength to strength.

Further to my previous comment - it is absolutely scandalous that here we have two families under threat of losing their home due to an involvement with this council.

I would dearly love Mark James and his Head of Planning to explain to me how they believe they are not to blame, and that we deserved to be placed in this most shocking of situations. It is absolutely clear we did nothing wrong - they did - and in bucket loads!! Remind me we live in Wales not an undemocratic country where we could expect such injustices to take place.

The fact that mr james feels the need to silence the press implies there is something he doesn't want known.

In which case that suggests its something not strictly correct or inline with rules and regulations.

The Herald only needs to dig a little deeper and be consistent in its determination to uncover the truth and what is actually going on.

Well done james- you are providing people the spade to dig your own career grave. And not before time too. A narcissistic bunch like this gang will always come unstuck eventually and to watch this shower disintegrate will give many people a sense of deservedness and justice served well.

The council is not a vehicle for their nefarious gains and its about time they realised this.