The Care case...questions for the council

This week's Carmarthenshire Herald continues with another detailed article on the disturbing deprivation of liberty case covered in last week's edition. I mentioned it here and Cllr Sian Caiach, who has fought the family's corner for five years has written a detailed piece on her blog here. I recommend you read the latter for background and comment. The Herald article is not currently online.

The essence of what happened is that social workers and council officers initially removed 'H', a severely autistic young lady, from her family, following allegations of abuse made against her parents. The allegations had been made by two carers who had recently been suspected by the parents of taking their daughter's pocket money whilst on day trips.

The council's initial reaction may have been reasonable although at no time did it appear that the staff involved, and we must assume senior staff were involved in such a serious case, took an objective view of the initial evidence.

What then followed was far from reasonable. Instead of admitting that a mistake had been made, the council, in the face of overwhelming, independent and expert evidence that no abuse had taken place, embarked on a course of action to justify their initial response. Their ultimate aim appeared to be to permanently remove H from her parents.

As I said, instead of admitting that a mistake had been made and returning H to her parents, the council put the family, including their vulnerable daughter, through six months of untold agony.

"...the social workers involved appear to have prejudged all issues, irrespective of whether they were supported by evidence. With their preconceptions and prejudices punched full of holes, social workers were hell bent on justifying their actions and not reuniting a family divided by demonstrably bogus allegations of abuse"


Herald columnist Cadno, whilst fully acknowledging the difficulties faced by social workers, writes on the case in this week's edition

"Trapped in a danse macabre between its rock solid self-righteousness and a whirlpool of evidence that should have told those concerned they were heedlessly waltzing towards disaster, the Council’s social workers and their managers refused to believe the obvious: that they had been led down the garden path by those whose motives were – at the very least – open to question.

An autistic adult was whisked away from her parents on the basis of slanted and dubious evidence. And kept away even when the scale of the error was made plain. There can be no excuse, no special pleading, and no vindication for such a course of action."

The Herald asked the council's social services department to explain their position in regard to to their apparent determination to prevent H being returned to her parents. There was no response.

They also asked the Exec Board Member, Jane Tremlett and the Chair of the social care scrutiny committee;

"to provide a response setting out how they have engaged with this case and what steps they took to challenge officers on their conduct in connection with it".


As you will know from Cllr Caiach's efforts, there has been no scrutiny nor challenge and members only became aware of the case after Cllr Caiach requested the report from the Ombudsman.

However, a 'response' was received, purporting to be from Cllr Jane Tremlett. It includes the usual tight-lipped platitudes that 'lessons' continue to be learned from this case', and that as the matter might still be sub judice, it would be inappropriate to comment.

The council have settled H's case but despite being told by a judge some time ago to settle the case brought by H's parents, they still have not done so.

Once their case has been settled, the parents will be free to talk about their experience, which, I suspect, is not something the council will relish.

As Cllr Caiach puts it,

"Do they [the parents] have to wait for every employee involved to retire or move on, to spare their blushes?"

"I think we could do with some urgent openness and accountability here. It is not just one catalogue of errors that concerns me but the whole culture of reacting to bad news by secrecy and denial. Hiding the truth only perpetuates the injustice and may invite a repeat performance".

There is no doubt that this case must be looked at by the new Plaid Cymru led administration.


The full article, and the Cadno comment can be read in this week's Herald. 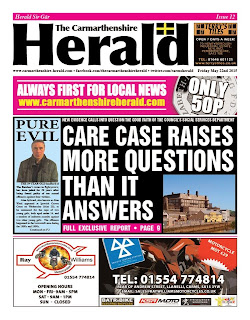 The paper really is doing a good job in letting in the sunlight. I think also the poor old journal is now waking up to the fact that they can be more than an organ simply to churn out press releases.

Not only does the Heral appear to be fearless it is also a bloody good read and well worth 50p. I'm not connected to the paper I promise - it's just so refreshing to read a paper that can be critical of the council when required.

Time to name and shame!

Can anyone please provide a link to the article featured in the Carmarthenshire Herald on the 15th and 22nd May 2015 about the young lady referred to in the Ombudsman's report as H.

Can you also please provide a link for the Ombudsman's report concerning this case.

The articles in the Herald are not currently online. If they become available I'll provide a link on this post.

The Ombudsman's report is only available on request from the Ombudsman Wales website. The report was issued in August 2012 and the case reference number is 201101540.

I have been asked by an organisation for a link.
In that case I will send them a copy of the article.

The first Herald article on this case is now online here; http://www.carmarthenshireherald.com/5438/a-major-injustice/