News round up - planning tales, and more - updated

Following the damning Audit Wales report on Carmarthenshire's Planning Services, the Ombudsman has also found the council lacking.
A brief report, from June 2021, shows that the council's approach to planning, enforcement and complaints is still dire.
The Ombudsman upheld a complaint, by 'Mr A', concerning planning enforcement on a neighbouring property. The council investigation had been 'inappropriate' and biased, and the council's initial investigation contained 'omissions and discrepancies'.
The council now have to pay Mr A £250, and appoint an independent consultant to investigate all aspects of Mr A's complaint and review the council's handling of the matters complained about.
Oh dear.
Which reminds me of an enforcement complaint I made early last year on behalf of several residents. They were concerned that Plaid council leader Emlyn Dole and family had ignored several planning conditions on the notorious 'two barns' development leading to issues with highway safety.
I've still heard nothing. It's either been ignored, like the planning conditions, or is the 761st in the backlog list, and will likely stay there.
In other news, the council's 'wholly owned' housing company, Cartrefi Croeso, set up in 2018  is now being mothballed and made 'dormant'. Apparently there is now no need for it as council borrowing rules have changed. I doubt that that is the full story and I suspect smoke and mirrors are in full use.
You'll recall that Delta Wellbeing Ltd the council owned call centre was nearly struck off  Companies House earlier this year. The council waste company, Cwm Environmental is currently in dispute with the unions as, seemingly, it prefers to retain poorer pay and conditions for its staff than those employed by the council, despite the fact that the council owns it.
Anyway, I noticed that one of Cartrefi Croeso projects, which has planning consent for 16 mixed tenure homes 'does not make the best use of the site' and 'a value engineering and design review' is required. A review of the planning consent is now required...which the Council granted for themselves in the first place...
It's clearly a shambles.
Incidentally another reason given for mothballing the company right now is that the Managing Director of the company, Robin Staines, who was also the Council's Head of Housing, has recently resigned from the council.
Fortunately he has just set up his own consultancy company, should they happen to need any advice.....for a small fee.
Mark James' consultancy company Ffynnon Consultancy is still turning a modest profit, one wonders who is consulting him, and why. Maybe it's for expert advice on tax avoidance, or scamming the taxpayer, or setting up offshore trusts to squirrel away a few bribes...who knows.
Incidentally, Caebrwyn has been making FOI requests for documents and files relating to the criminal investigation into the Wellness bribery scandal involving the aforementioned Mr James, and others. Requests have gone to the CPS, four police forces and the council. So far only the CPS have responded, and that was a refusal. We'll wait and see what the others come up with.
As I've said before, I'll make sure Mr James is held to account, one way or another. That's a promise.
Finally Burry Port's asbestos-strewn beach is back in the news. Earlier this year photos appeared of children's sandcastles decorated with bits of asbestos. The toxic substance comes from the old Carmarthen power station. Unfortunately, when it was demolished twenty years ago the debris was just buried where it lay and coastal erosion has unearthed the crumbling, flaking asbestos.
What is remarkable is the council's response. A warning sign was eventually put up but the beach was not closed. The council have continued to play down the problem as 'low-risk', as if asbestos isn't really that bad. They have reluctantly agreed to remove any visible bits, perhaps it's those bits decorating the sandcastles.
A local campaign group resorted to paying for its own tests, which all came back positive, and alarming. They are pushing for a proper clean up before the asbestos spreads even further afield.
The reason why the council are playing down the problem is their desire to flog parts of nearby land to developers, including 360 homes on the nearby Grillo site, another highly toxic legacy of the industrial past.
Interestingly, one wonders why the council is so determined to build so many new homes as figures published today reveal  that Carmarthenshire is top of the list for empty homes, with nearly 3000 in the county. So much for the council's Empty Homes Policy, which, we are told, has been a roaring success!
Burry Port update 15th September:
There has been a partial clean up of the beach but unfortunately, as this recent picture shows, asbestos is still present; 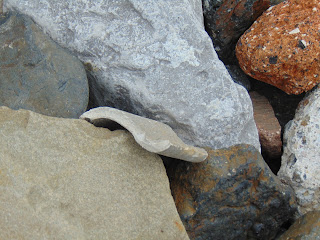 Despite the partial clean up the signs now only warn of coastal erosion, and the footpath barriers can be easily moved, and have been. 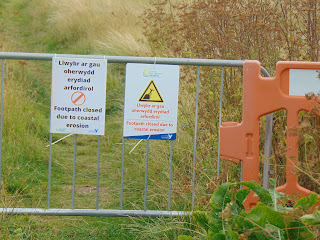 See below from a contributor. The issue of flooding and climate change has often been completely ignored by the council, despite officially declaring a climate emergency in February 2019.

"Flooding is already the major issue impacting the study area with Llanelli recording the highest risk of present and future flooding.
The addition of new development upon previously developed sites in areas of high vulnerability will increase pressure upon drainage and sewage systems leading to an even greater risk of flooding in the estuary....
The lack of knowledge of coastal processes when planning as part of the Regeneration strategy for the study area, has previously led to erosion and flooding potential to new developments.
It can be reasoned that the council's locating of of future infrastructure and development in coastal areas, despite recognisable vulnerability to flooding and coastal erosion, in the face of climate change, reveals a propensity to favour short term economic gain from coastal real estate and investment opportunities"

Check Climatecentral.org to see whether your area is going to be badly affected.

It has been reckless to allow planning permission for sites close to the sea or other large water bodies. Llanelli already relies on tide locks - valves at the mouths of streams and rivers which close as the tide come in and open when it goes out, Without this the town would flood twice a day. At some point in sea level rise, the tide locks may not open and the rivers and streams may backflow into the low lying areas.

Carmarthenshire C.C. has been allowing development on flood plains and vulnerable coastal areas for decades without a thought to the welfare of those likely to be affected by the expected flooding. You can raise a site well above sea level but what about the roads and other access?. Where are the plans for a worst case scenario? Islands of residential developments needing rescue strategies for the future.

The council is still apparently trying to sell off coastal sites such as the heavily polluted Grillo Factory Site and planning other residential developments next to the sea. Do we have to experience disaster before the County Councillors wake up and notice that climate change is real and not to be ignored?

@Sian Caiach
I agree, reckless indeed. Perhaps it's the final irony of Mark James' rule that he wasted endless resources and public money on planning and even sometimes building white elephants which will all be washed away by 2050.