Carmarthenshire democracy takes another turn for the worse

Yet again, democracy takes another turn for the worse in Carmarthenshire. You may recall my recent posts dealing with the Constitution and how it is being 'tweaked' to counter dissent and the democratic process. The most recent dissent that needed to be put down was the call, by Cllrs Arthur Davies and Sian Caiach, for a Vote of No Confidence in the Leader, Meryl Gravell. Already blocked for October's meeting you will recall that at that meeting a resolution was passed that seven signatures were needed for a motion such as this to be debated. As this motion had been submitted several weeks ago one would think the new rules should not apply retrospectively. Not so! It seems the Chief Executive has decided that they should and has informed Cllr Davies of this - too late for him to resubmit it with additional signatures. A legal opinion has been sought and it seems very unlikely that a resolution can be backdated in this way, reading the letter below it would appear that this decision is based on the opinion of the Chief Executive rather than on legal evidence.

You may also note that there is not even a cursory reference or footnote to the Chair, Cllr Ivor Jackson who is, I believe, supposed to have a say on these things?? (not that he'd disagree of course)

It is unlikely, with the loyal support of the Independent and Labour votes and probably half of Plaid that Cllr Gravell would lose the vote anyway and you will see that the letter is copied to the three party leaders. But a debate? We can't have that, one has to 'play the game'. You may or may not agree with the rebellious Councillors but one day it could be another issue at stake, something that concerns you - and unless someone fights back against this appalling erosion of democracy we are witnessing, it will be too late.

As I mentioned in my previous post, 'The Listening Council', the next Council meeting is one week away (9th, and as I said, please join me if you can) and a week can be a long time in politics, even in the weird world of Carmarthenshire Council - I hear the fight is not over despite attempts to smear the dissenting voices. I shall look out for the Agenda and we'll see what happens....
(Please click on the letter to enlarge) 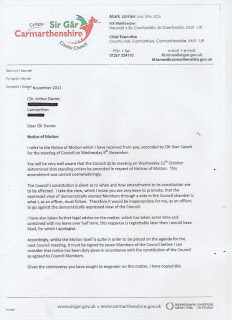 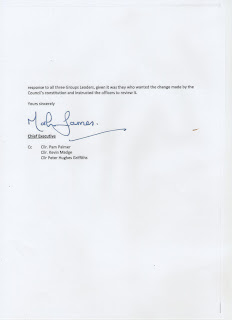 Please see several recent posts on the issues involved.
In his comment below, Y Cneifiwr refer to an excellent letter in this week's Llanelli Star. Here is a link to it;
Council rule astonishing ; very well said Clem Thomas of Dafen.

Update 3rd November; The Agenda for next week's full council meeting has been published - no trace of a Vote of No Confidence; http://online.carmarthenshire.gov.uk/agendas/eng/COCO20111109/index.asp Neither, I notice, are the exempt items from Monday's Executive Board meeting regarding the Excel loan and Technium. Maybe they will be ratified at a future meeting or maybe not...I will keep a look out.
Posted by caebrwyn at 14:46

"You may or may not agree with the rebellious Councillors but one day it could be another issue at stake, something that concerns you - and unless someone fights back against this appalling erosion of democracy we are witnessing, it will be too late."

reminds me of Martin Niemoller's poem:

First they came for the Jews and I did not speak out - because I was not a Jew.

Then they came for the communists and I did not speak out - because I was not a communist.

Then they came for me -
and by then there was no one left to speak out for me.

There was an excellent letter in this week's Llanelli Star pointing out that if the same rules were applied in Westminster, Plaid Cymru, the SNP and the parties from Northern Ireland would all be silenced. Not so very long ago, the Lib Dems would also have found themselves muzzled when they had less than 10% of the seats.

Contrary to the chief executive's opinion, it is not democratic to vote to abolish other people's democratic rights.

@Cneifiwr I have now put a link to the letter in this post.

I think I must have died and come back to live in a parallel universe.

I now live in a land where all but a few of our elected representatives are ignored by council officers. It is a land which closes vital services for vulnerable people but still spends thousands of pounds of our(my) money on rugby and a bowling club for a church group, such decisions supported by the Labour Party and Plaid Cymru ???. It is a land where an English speaking councillor pretends to run a bilingual Twitter account hoping that nobody would notice that its not her running it and where the Chief Executive earns more money than the Prime Minister. Perhaps I will wake up soon !!!