Filming and Spending petitions discussed at the Senedd

Further to last Thursday's post Carl Sargeant to encourage councils to allow filming I have just watched the Assembly Petitions Committee discuss both the filming and the 'publishing spending details over £500' petitions. Again, like the last time there was broad support for both, neither has been closed and will be discussed with the Minister, Mr Sargeant when he attends the Committee on the 10th January.

Filming (Now closed for signatures but can be seen here)
With the level of technology around today, and the access to meetings by the public and press, Russell George AM pointed out that it 'seemed silly' for councils to prohibit the public from filming. The committee felt that there was little or no opposition to the principle of webcasting meetings from AM's or most councillors. The only reservations (I shall take Mr Sargeant's comments that he will encourage members of the public to film as a given) were issues of cost but Bethan Jenkins AM pointed out this may be a very worthwhile expenditure and could be balanced against the current high level of spending on PR, council newspapers and glossy brochures. Concerns regarding the availability of decent broadband to view meetings was also an issue (yes, that's an issue in itself) but according to one Member, by 2015 we will all have access to superfast broadband. Let's hope so. There was general consensus for further research prior to the meeting on January 10th including evidence from the Welsh Local Government Association (WLGA).

Spending over £500 (Also closed for signatures but can be viewed here)
Again there was broad support for councils to publish details. Any reservations were again related to the cost of publication - this again should be balanced against the cost of related Freedom of Information requests, an example was given where a requester wanted the details of the budget of every school in one county. More research will be done before the meeting on the 10th January - I can only suggest they ask Monmouthshire Council about the costs and practicalities of publishing theirs.

So, it looks like I will be waiting for the 10th January - I may submit further statements myself for that meeting - and I will be watching, with interest, what Mr Sargeant has to say.

Today's Petitions Committee, now archived, can be viewed here , (or click on the picture below). My petitions are discussed at 32 minutes 10 seconds into the meeting (scroll across the viewer to the appropriate time). 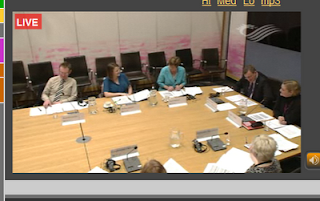 Sounds positive. Common sense prevailing at last?? In view of Parliament being filmed, the meetings within the assembly, Monmouthshire council, the courts, and indeed Jo Blogs public everywhere he goes, it does make you wonder what the hell Mark James and his band of 'not so merry men' have to worry about?? We, who have had the misfortune to get to know them all pretty well, know very well why they don't wish to be filmed; especially now the councillors have so very few powers left, and nothing left to say; they may well find themselves out of their jobs as the public at large become aware of the fact they are no longer represented by them.