Wales on Sunday reports on the Towy Community Church

I see that the press has now finally picked up the story about the Towy Community Church. As you may have read here and over on Y Cneifiwr's blog, the amount that has been given to the church by Carmarthenshire County Council actually comes to nearly £1.3m in land deals, grants and loans. This has been over the past eighteen months, and as I and the report notes, the link to the Mercy Ministries was only removed last week. It is also worth noting that the Leader of the Council saw this as a vital investment to reduce pressure on the social care budget. I notice the council declined to comment. I'll say no more. Please search this blog for further background.

Church Linked to Exorcists is given Council cash - Wales On Sunday
By Daniel Fisher
"A church given tens of thousands of pounds by a Welsh council is a “partner” of a Christian group whose global operation has been accused of exorcising young women, Wales on Sunday can reveal.
Evangelical Towy Community Church, which has received more than £55,000 in grants from Carmarthenshire council, yesterday confirmed it made monthly donations to the Mercy Ministries group in the UK.
There were calls for transparency last night over whether public money was being funnelled into Mercy Ministries, which runs residential programmes for young women with “life controlling issues”.
The group, which has bases in the USA, Canada, New Zealand and Australia, is founded by a US evangelist who has written books and given speeches blaming psychiatric illnesses and homosexuality on “demonic activity”.
It claims it has helped more than 2,500 girls worldwide to overcome depression, eating disorders, addiction and other problems but it has been mired in controversy.
The UK arm of Mercy Ministries, which opened in 2006 and is based in the village of Oxenhope, Yorkshire, says it does not endorse or perform exorcisms. But in 2009 a former resident spoke out about her nine-month residency with the group, involving intense study of “demonic oppression”, which she claimed had left her “deeply disturbed”.
Towy Community Church said Mercy Ministries’ work was “important” and confirmed it was a “partner organisation”, though added it no longer financially supported the group.
The church has used public money for a number of projects such as setting up a bowling alley, debt counselling and plans for a possible conference centre.
Its website had stated a “vision” to open a Mercy Ministries in Carmarthen, but this has been removed in the past week.
Jonathan Edwards, MP for Carmarthen West, said: “Having read about Mercy Ministries, I am concerned to learn that Towy Community Church intends to establish a base for the organisation in Carmarthenshire.There should be no relationship between public authorities and such a fundamentalist organisation. The Welsh Government and the county council have provided substantial sums of money to the Church. It is therefore a legitimate question as to whether public funds have been used to fund, directly or indirectly, Mercy Ministries.
“Carmarthenshire county council must urgently investigate this situation and ensure taxpayers money has not been funnelled into this extreme group”.

Former AM Lorraine Barrett, who now conducts humanist ceremonies, said:“If the county council is giving money to a church then there needs to be total transparency about where that money is going.
“I would be concerned if money was being siphoned off for any kind of missionary work.”
Mark Bennett, founder of Towy Community Church, said the money it received from Carmarthenshire council would “give people of all ages and backgrounds the opportunity to reach their full potential and support the physical and community regeneration of our town.”
He said: “As Christians, we are passionate about helping those in need. Towy Community Church had previously supported a gap-year student at Mercy Ministries UK and decided to make a financial donation of £20 a month. We felt that helping women suffering from eating disorders, depression and self-harm was important.
“We are so thankful for the funding we have received from the many organisations that have captured the vision for the project, and who have had the faith in us – as we strive to work on behalf of those in need.”
A spokesman added: “The term ‘partner’ is a term that is used to describe individuals, churches or organisations who support them through financial giving.
“ It does not in any way mean that we are linked or associated with them through any legal or denominational ties whatsoever.
“ It just means that for a period of time we decided to make a small monthly contribution to what we thought was a worthy cause.”
Elfed Godding, national director of the Evangelical Alliance Wales said: “Mercy Ministries is not a member of the Evangelical Alliance. But Towy Community Church is. It is a shining example of how Christians should be working to transform their society for the good of all.”
Neither Carmarthenshire Council nor Mercy Ministries replied to requests for comment"

It also has to be said that even a simple google search would have indicated the link to the Mercy Ministries, so, surely the council would have known about this for the past eighteen months? We'll just have to wait for a comment won't we. 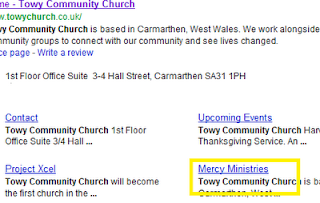 I get the impression that this matter is turning into a scandal - assuming that someone in authority has taken a decision to contribute so much public money into this church project will that person (or persons) resign. Also is it right that with budgets being cut abd services contracted public dosh is chanelled into a bowling alley regardless of the religious aspect. How long would the day centres be operating on the cash already given to the TCC I wonder.

Wales on Sunday can reveal. -- they could have prefixed that statement with "thanks to reading Jacqui's blog"

Well done you, now let's hope the WM joins in and keeps the pressure up not disappears having done their bit.

There are many, many questions for the council in particular to answer here. They include the finances of the project, the lack of accountability of senior council officers and just why the council thinks that fundamentalist churches are appropriate partners.

It does not just concern the bowling alley project. The council seems to be getting closer and closer to these extremists.

@Cneifiwr If the Council continues with the 'no comment' stance, let's hope a worried councillor or two are 'allowed' put some of these questions on the Agenda to be heard, in public, at the next full council meeting on the 7th December

This business is positively disturbing. Good work (as ever) Jacqui.

I wonder who the members of this church are.