As you may recall from my post the other day, Carmarthenshire council misses the point, the Policy and Resources Scrutiny Committee were on the verge of recommending to the Executive Board a 12 month pilot to film full council meetings. The broadcasts would not be live and would be uploaded, probably a couple of weeks later after being carefully censored, with all the appeal of reading a two week old newspaper. Whether this unsatisfactory proposal would actually happen, and what would become of the idea after 12 months is anyones guess.

The meeting was held yesterday, and the recommendation approved. Caebrwyn was unable to attend but rather wished she had as Cllrs Darren Price and Alun Lenny part of the Plaid Cymru group on the committee put forward this amendment as an addition;

Amazingly, although I don't know whether it was unanimous, it had cross party support and was accepted.

The idea, as if I haven't gone on about this enough, being that the public can take their own recordings irrespective of whether the council is doing it too, and to ensure a true record can be made rather than an edited form. Readers are also aware that there has never been a Rule/policy/anything against it anyway, but the council and I seem to disagree on that point, along with the unlawful undertakings etc.

Anyway, with cross party support, including Labour and Independents of course, the Executive Board will have difficulty in refusing it - I can only imagine that this is going to go down like a lead balloon with the Chief Executive, Pam Palmer, Meryl and Co - the next meeting of the Executive Board is on a memorable date, November the 5th, so they have until then to mull it all over.

I will, of course, be there.

As for democracy in Carmarthenshire, there's still a long way to go yet.

The Plaid Cymru group on Carmarthenshire County Council has started a process which could lead to the public being allowed to use their mobile phones and other recording devices to film council and committee meetings.

A key point in the long-awaited report on e-Government, presented to the Policy and Resources Scrutiny Committee, recommended that the Council should pilot both audio and film broadcasting of Council meetings.

Councillor Darren Price, Plaid Cymru member for Gorslas, moved an amendment that the public should also be allowed to make their own recordings. The amendment, supported by Labour and Independent councillors, will now be considered by the Council’s ruling Executive Board.

“I’m extremely pleased to have cross-party agreement on my calls to allow members of the public to undertake their own filming of council meetings.

“The report on e-government noted the importance of ensuring proceedings are more transparent whilst understandably not wanting to add further substantial costs to the authority’s budget.

“In a digital age where most mobile phones already have camcorders built in, I think it’s sensible to allow members of the public to undertake their own recordings should they wish.

“I'm hopeful that the Executive Board will support the idea, given the cross-party support it received at the Scrutiny Committee”.

In seconding the amendment, Cllr Alun Lenny pointed out that giving people the right to film council meetings has been strongly advocated by Eric Pickles, the local Government minister for England, who said that council openness needs to be updated for the 21st Century. More and more news about what happens in council meetings comes from internet bloggers.

“Unfortunately, this council has a reputation for being less than open and transparent in its proceedings,” said Cllr.Lenny. “That is the perception amongst many people. Allowing the public to record proceedings would go a long way towards banishing that perception.” 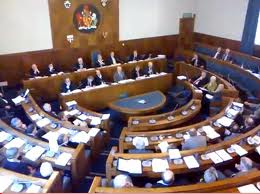 wHAT A PITY YOU MISSED IT, HOWEVER WHAT A CHANGE, GOING TO BE VERY INTERESTING TO SEE HOW THE EXEC GET OUT OF THIS ONE.

What a pity for you you missed that pleasure, you deserve to have seen it.

Going to be very interesting seeing the execs reaction, all party support is very powerful in a democracy.

As great as this decision is, I have no confidence that it will get past the Exec Board.

Lets hope that the (free) press are there to watch the Exec Board meeting and report in full how they conspired to block a decision with cross party support.

Still, this is progress and a further example that the Exec Board is out of touch and should be abolished.

I agree but I hope as many people as possible join me at County Hall to lobby for this when it is up for decision.

I suspect the CEO and Executive Board were planning to have a public filming ban enshrined in their make-it-up-as-you-go-along rule book if the pilot is approved.
The proposed pilot scheme is worse than useless of course.

The cat is definitely amongst the pigeons over this one.
Watch this space.

One of the reasons that may given to block this is that recordings may be posted selectively and out of context. However now that the council are recording meetings they wil always have a master copy as it were and would be able to rebutt attempts to misuse the right to film meetings.

The council must approve this - to fail to approve this very moderate step forward would be perverse. It ticks all the democratic boxes including the most important for Pam (not a penny on the council tax) Palmer in that it is not going to cost a penny.

The only ones to fear the measure would be the dinosaurs that fall asleep at our expense !!