The Carmarthenshire Herald - the fox is on the case... 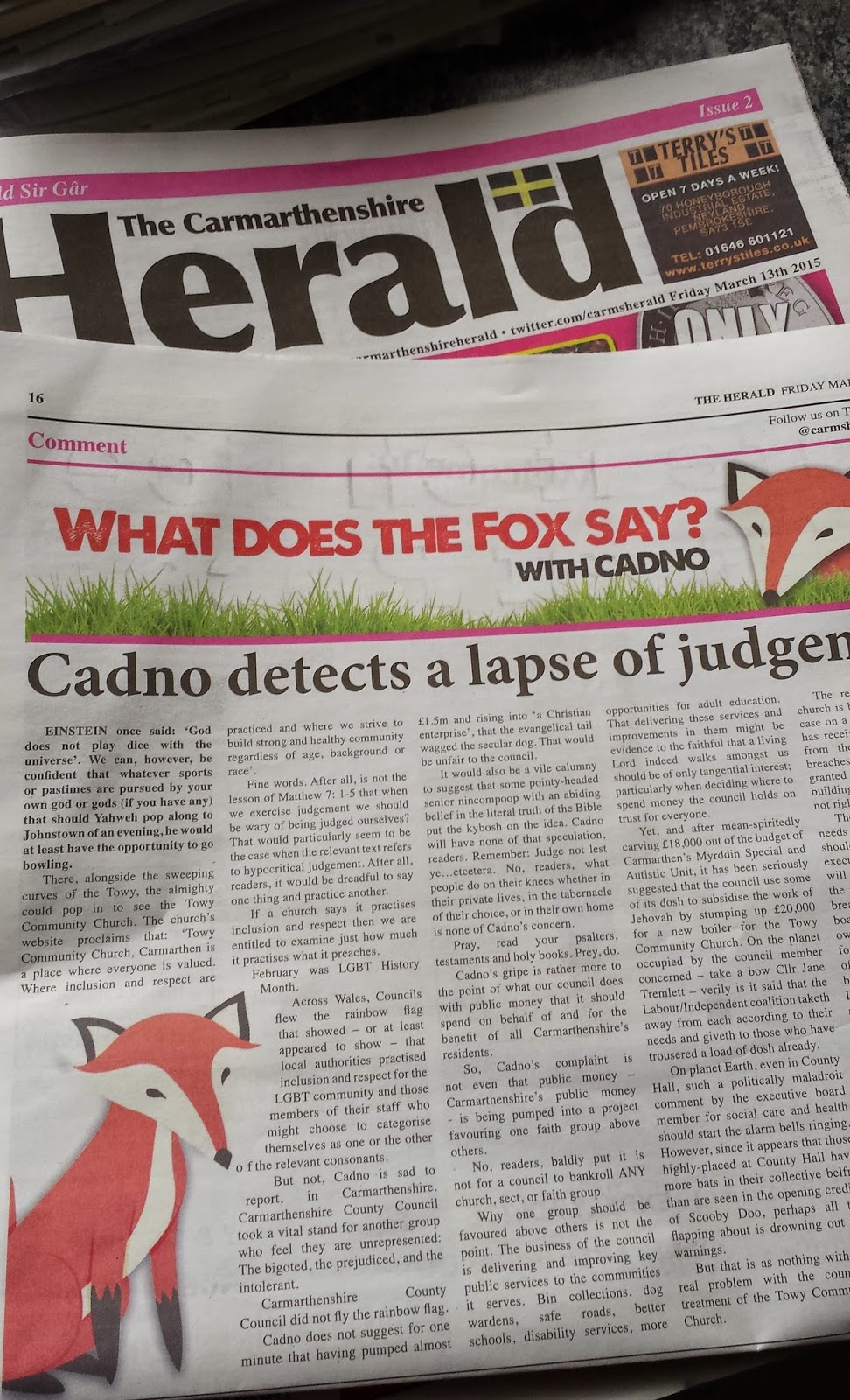 This week's edition of the Carmarthenshire Herald picks up on County Hall's relationship with the Towy Community Church and their recent appearance on the Executive Board agenda.
All summed up in this fine opinion piece by 'Cadno' (the fox);


Cadno detects a lapse of judgement

"Einstein once said: “God does not play dice with the universe.” We can, however, be confident that whatever sports or pastimes are pursued by your own god or gods (if you have any) that should Yahweh pop along to Johnstown of an evening, he would at least have the opportunity to go bowling.

There, alongside the sweeping curves of the Towy, the Almighty could pop in to see the Towy Community Church. The Church’s website proclaims that: ‘Towy Community Church, Carmarthen is a place where everyone is valued. Where inclusion and respect are practiced and where we strive to build strong and healthy community regardless of age, background or race.’

Fine words. After all, is not the lesson of Matthew 7: 1-5 that when we exercise judgement we should be wary of being judged ourselves? That would particularly seem to be the case when the relevant text refers to hypocritical judgement. After all, readers, it would be dreadful to say one thing and practice another.

If a church says it practises inclusion and respect then we are entitled to examine just how much it practises what it preaches.

Across Wales, Councils flew the rainbow flag that showed – or at least appeared to show – that local authorities practised inclusion and respect for the LGBT community and those members of their staff who might choose to categorise themselves as one or the other of the relevant consonants.

But not, Cadno is sad to report, in Carmarthenshire. Carmarthenshire County Council took a vital stand for another group who feel they are unrepresented: the bigoted, the prejudiced, and the intolerant.

Carmarthenshire County Council did not fly the rainbow flag.

Cadno does not suggest for one minute that having pumped almost £1.5m and rising into ‘a Christian enterprise’, that the evangelical tail wagged the secular dog. That would be unfair to the Council.

It would also be a vile calumny to suggest that some pointy-headed senior nincompoop with an abiding belief in the literal truth of The Bible put the kybosh on the idea. Cadno will have none of that speculation, readers. Remember: judge not lest ye…etcetera.
No, readers, what people do on their knees whether in their private lives, in the tabernacle of their choice, or in their own home is none of Cadno’s concern.

Pray, read your psalters, testaments and holy books. Prey, do.

Cadno’s gripe is rather more to the point of what our Council does with public money that it should spend on behalf of and for the benefit of all Carmarthenshire’s residents.

So, Cadno’s complaint is not even that public money – Carmarthenshire’s public money - is being pumped into a project favouring one faith group above others

No, readers, baldly put it is not for a Council to bankroll ANY church, sect, or faith group.

Why one group should be favoured above others is not the point. The business of the Council is delivering and improving key public services to the communities it serves. Bin collections, dog wardens, safe roads, better schools, disability services, more opportunities for adult education.

That delivering these services and improvements in them might be evidence to the faithful that a living Lord indeed walks amongst us should be of only tangential interest; particularly when deciding where to spend money the Council holds on trust for everyone.

Yet, and after mean-spiritedly carving £18,000 out of the budget of Carmarthen’s Myrddin Special and Autistic Unit, it has been seriously suggested that the Council use some of its dosh to subsidise the work of Jehovah by stumping up £20,000 for a new boiler for the Towy Community Church. On the planet occupied by the Council member concerned – take a bow Cllr Jane Tremlett – verily is it said that the Labour/Independent coalition taketh away from each according to their needs and giveth to those who have trousered a load of dosh already.

On planet Earth, even in County Hall, such a politically maladroit comment by the Executive Board Member for Social Care and Health should start the alarm bells ringing.

However, since it appears that those highly-placed at County Hall have more bats in their collective belfry than are seen in the opening credits of Scooby Doo, perhaps all the flapping about is drowning out the warnings.

But that is as nothing with the real problem with the Council’s treatment of the Towy Community Church.

The real problem is that the Church is being treated as a special case on a matter of enforcement. It has received preferential treatment from the Council in relation to breaches of the planning permission granted to it for the use of the building it occupies. Readers, this is not right.

There is no planet where the needs of a small extremist sect should entitle it to expect that the Executive Board of this council will let it get away with breaking the rules. And in order to facilitate breaking the rules the Executive Board went on a jolly outing to God’s own bowling alley so they could see for themselves the multiple breaches of a legally binding agreement between the Council and the Church. Isn't there something somewhere about rendering unto Caesar…?

One can but guess as to why the Executive Board is so supine in its dealings with Towy Community Church. Perhaps they are answering to a higher voice; to their own immanent divinity. If they are, Cadno has some minatory words that may be of use to them. They are also from the Gospel of Matthew. At 7:15, we are all enjoined to: “Beware of false prophets, which come to you in sheep's clothing, but inwardly they are ravening wolves.”

Of course, readers, bearing in mind the largesse being strewn around the Towy Community Church, the profits are very real."


(Recent and relevant posts on this blog include; No fly zone for the Rainbow flag, Bending over Backwards, and Roads and religion. Earlier posts include a 2011 article in Private Eye)

The Carmarthenshire Herald's letters page carries a welcoming message from a Carmarthenshire resident describing its arrival as a breath of fresh air. The writer goes on to say;

"...Keep up the good work to fearlessly report the machinations going on inside County Hall in Carmarthen - something that those without access to certain 'blogs' have been denied for years!

However, I hope that 'Cadno' manages to avoid the 'hounds' and the 'huntsmen' from the Kremlin - sorry, County Hall in Carmarthen. They can be ruthless and firm believers in censorship"


Yes indeed, good luck to Cadno, and the Herald, as only last week I received a legal threat from chief executive, Mr Mark James in relation to this blog.
Posted by caebrwyn at 11:20

Something is up. In W H Smiths and M and S in Carmarthen I was approached by middle aged women bearing gifts. Each had a wad of copies of the Carmarthen Journal and we're offering copies and free offers.

Could it be that the Journal is a little rattled by the new kid on the block ?

Quite a few interesting articles this week and the Cadno opinion piece is excellent.

Pay for news or have rehashed spin for free.

I Hope to pick up a Carmarthen Herald tomorrow.

What has been put in your blog that warrants a legal threat I wonder?
The CEO enjoys a high profile and seems to believe he has a reputation to be proud off which deserves to be protected at all costs. "He who must be obeyed" can rely on his minions the executive members to pull out all the stops in protecting his "reputation" against the slings and arrows from unhappy members of the public he "serves".

If the CSSIW, the Ombudsman & WAG regulated, investigated and controlled the shenanigans of the CCC and confronted the very visible problems caused by lack of accountability, misconduct and maladministration, there would be no reason for us to throw brickbats at its workings ourselves.

All this under Mark James' watch; it says something about his & the executive's ability to fulfil their mandate doesn't it?

Do tell what this oh so sensitive crew are Upset about now.

To those enquiring about the latest legal threat;

The threat is non-specific although apparently relates to 'recent blog posts'. The threat is tagged in at the end of the latest demand for money.

More in due course.

I find it interesting that the legal threats are non-specific, as it seems to me that any sincere complaint of libel would detail precisely what the complainant considered libellous. How can you possibly take down a posting, thereby reducing the perceived damage to his reputation, if he doesn't identify the text in question. Indeed, how could you avoid making similar statements in the future without this information?

Does the threat come from Mr. James personally, or is it from / on behalf of the Council?

If it comes from Mr. James personally, then I find it hard to believe that he has been professionally advised to take this course of action – for one very simple reason – following the last libel action you now have no assets to sue against. It's a pointless action.

If the threat comes from / on behalf of the Council, then that opens up all manner of interesting considerations. For a start, the item in the constitution allowing the use of council funds to support an officer in an attack has been suspended. This would fly in the face of the Derbyshire Agreement…

It's hilarious to me that a council so obsessed with its reputation and public profile is so willing to make itself such a laughing stock through it's continued behaviour in this manner. Grow up, and either implement the WLGA findings in their entirety and without delay, or resign…