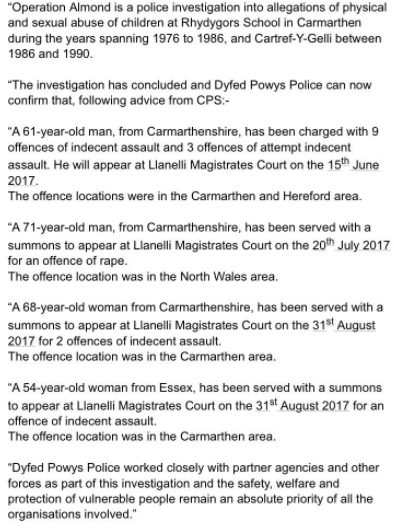 BBC Wales have obtained a Social Services Inspectorate report dated 1998 regarding the Cartref-Y-Gelli Children's Home. The home closed in 1998 but Carmarthenshire Council will not say why.

"The report published in 1998, obtained by BBC Wales, makes 14 recommendations for Carmarthen's Cartref-y-Gelli.
It says not all children were confident "of being listened to and some expressed a feeling that it was not worth complaining".
Carmarthenshire council has been asked to comment."

Grim news (BBC Wales) emerged this week that six people have been arrested in relation to allegations of sexual and physical abuse of children at Rhydygors special school and Cartref-y-Gelli childrens' home in Carmarthen. The allegations date from 1976 to 1990.

Rhydygors is a pupil referral unit for children with social, emotional and behavioural difficulties, Cartref-y-Gelli closed some time ago. The allegations relate to abuse of over twenty victims and all involve members of staff, none of those staff still work at the school.

Allegations relating to Rhydygors were first investigated in 2000 and referred to the CPS but criminal proceedings were not instigated. Those allegations and the investigation were not reported to the media at the time.

Additional allegations, including those at Cartref-y-Gelli, were made in 2012 and the subsequent criminal investigation, called Operation Almond looked again at the earlier allegations afresh. The investigation, which is ongoing, has now resulted in today's arrests.

Carmarthenshire County Council has said it is working closely with Dyfed-Powys Police to fully investigate the allegations.

Statement from Dyfed Powys Police here
Posted by caebrwyn at 09:44

David Cameron has been talking about introducing a law where senior managers closing their eyes and ears to claims of abuse get 5 years in jail - my only question is why is there not a law like that NOW?

As a pupil i was physically assualted at Rhydygors in THE MID 80'S, there was never an attempt of restraint for myself. I was awoken being pulled out of bed in the morning by the hair and slapped whilst curled on the floor. I was pushed through several doors head first and hit around the head by another care worker to name two occasions that will always remain in my mind. There were two couples working there that you could tell as children were not getting on at times and these would take it out on the residents. Hopefully names will one day get published!

I was also another pupil. for now i wish to remain Anonymous as this is now a police investigation. I have put up on the yahoo review. what happened directly to myself. and named names. I cannot wait for this to go to court.
I was also physically assualted. by staff at Rhydygors in THE MID 80'S, only one other pupil has emailed me. stating how he could remembder my injuries very well. And i have given the police a copy of all emails regarding this.

As the anoymous pupil has said. There was never any attempt of restraint. And that was for all that attended the place. There was nothing but violence used towards children. And all i can say this has been enough to last everyone of us as children. A lifetime of evil memories. that each of us wish we could get a rubber. and rub them away. but we cannot do this. The only way i can best describe this. Is its like having a DVD player. implanted in your head. with a unpluggable 240v power supply. and having some random strainger pressing play on the remote. and speaking how good the place was back in the 80's. I was also woken up one morning by one member of staff that had the bottom half of two pool cues. And as i was still in bed. one half was rested on my nose. while this half was tapped with the other half. And that was with the bottom half of two pool cues. I can remember seeing many of my fellow pupils getting slapped across the face. even hit to the floor and then hearing the staff tell us all.

ANY OF YOU SAY ANYTHING. AND I WILL COME DOWN ON YOU LIKE A TON OF BRICKS.
as i have said there was nothing but violence. used towards us as children.
And the DVD PLAYER continues to play. and that is right up to this day.

Thanks Anon 10:17 - just awful. I hope the police are doing their utmost to bring perpetrators to justice.

I olso got punched and hair pulled there by the carer,ruined my life and still hornets me now

to you guys that was there will remember me as the one the could not hold in the building i ran away every day for two years strait my reason is that i saw a boy being raped in the mid dom i wasnt staying around for that. i saw people being beat for no reason whats so ever and that head we had there what a freak he was. i wont be giving names until court.,

This is very upsetting to read about. I applaud the victims who have survived this, and in particular those who have posted online, and those who are prepared to speak out in court. At the time, you were children. You had no control over the situation, nor could you have been expected to have had. You are adults now. You may have been scarred by what has happened to you, but you can wear these scars as badges of honour, as war wounds. Your very survival is a testament to your strength. If you are able to bring the perpetrators - including the authorities who stood by and did nothing - to justice then I salute you as heroes.

I am the author of this blog and am trying to contact Richard Harries who has submitted several recent comments. Please could you get in touch using the contact form on the right hand side. Thanks.