The Mark James budget is ratified

The first half of today's full council meeting was essentially to ratify the budget approved last week.
As I and others commented at the time, it was the intervention of the chief executive which was particularly inappropriate. Today's Carmarthenshire Herald seems to have reached the same view;

'Watching the meeting on playback a key role in the budget debate was played by controversial chief executive Mark James. Intervening in political repartee, and siding with the administration after stating that the Council's head of finance could not comment on the oppositions proposals, Mr James proceeded to comment on them and roundly reject them.

Mr James, whose 'peculiar' pension arrangements were the subject of a humiliating climb down by the council last year, and who lately had his request for a £400k+ severance package booted into the long grass, appeared intent on ensuring that the budget proposals before the council were accepted as written without amendment nor redaction.

The Labour/Independent grouping made sure that Mr James' bidding was followed."


As today's gathering was largely a technical rubber stamp for last week's decision the chief executive didn't need to join in. Safe in the knowledge that the decision could not be rescinded. The matter of cutting £18,000 from Myrddin Special School funding was mentioned several times but the Labour and Independent speakers chose to ignore it.

The argument over the use of reserves continued, which can all be seen on the archived webcast.
Plaid councillor, Elwyn Williams, proposed that £1.2m (1%) be taken from the earmarked reserves to cap the council tax at 3% instead of 4.8%. Plaid's original proposal to use £4.2m of reserves was defeated the previous week.

Mr James and legal Linda quickly intervened to claim that the constitution forbade such a vote being taken as it would affect last week's decision. The only way the proposal could continue to a vote was if the Standing Orders were suspended.

The vote to suspend Standing Orders was defeated by the Labour and Independents. So that was the end of that. Once again, Mr James' bidding was obediently followed. The proposal to cap your council tax didn't even get to the vote. 4.8% it is then.

As a reminder, the council currently has £122m in reserves stuffed under the County Hall mattress. 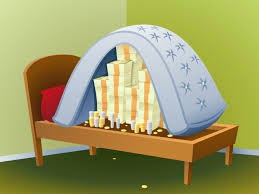 One final point with regards to the use of council reserves, or rather the refusal to use them. Earlier in the meeting there had been unanimous horror at the decision by the National Police Air Service to stop using Pembrey as a base for the police helicopter and all were agreed that they's send a stern letter to the Home Office.
Kevin Madge then went on to criticise the Police Commissioner for sitting on police reserves of £43m, some of which could have been to fund necessary frontline policing....oh dear.

The meeting then moved on to the Local Government Reform consultation, a topic which I covered briefly here. What was very strange was that the item had to be introduced by the chief executive (not the Chair of course..) as a 'debate'. Holding a debate, apparently, was not something they'd ever done before. As it was such a new concept he even asked for feedback on how they all thought it went.
Not sure what anyone thought was supposed to happen in the Chamber for all these years.

Kevin Madge proceeded to ramble on at length giving the Labour groups' view on the entire paper until somebody stopped him.

Anyway it doesn't seem that our councillors are very impressed with Minister Leighton Andrew's attempts to end the culture of 'old boys' clubs', not even from the old girls. There was much disgust over the 'five term' time limits for councillors and equal dismay at the possible reduction of allowances. Kevin Madge argued that the basic allowance was too low, although didn't comment on proposals to reduce senior councillors's pay, his being £49,000 per year.

Cllr Palmer also thought the idea of having an independent panel for the senior management selection process was an 'abomination', no less. Only councillors, such as her good self, and dear Meryl naturally, could know what was good for the people of Carmarthenshire...

There was a general consensus that the report was short on detail and not well thought through. Several interesting arguments were made (all available to view on the archive), but time ran out. The 'debate' will continue at the April meeting... so a subject to which we'll return in more detail.

Oh, and before I go, the annual Pay Policy Statement was also up for the rubber stamp. Not that I'm cynical about these things being PR exercises or anything but by happy coincidence, benevolently removing the lowest points on the staff pay scale, the ratio of Chief Exec pay to lowest earner has, er, 'plummeted' from 12.4:1 to 11.95:1.
Although of course these calculations wouldn't take into account any extra pay or benefits that the chief executive might happen to receive such as unlawful pension supplements, returning officer fees or unlawful legal costs.
Posted by caebrwyn at 18:23

Has anyone dared tell Mark he is actually a public SERVANT?